“Plunderphonics never sounded so cared for, so labored over, as it does on British expat Ben Roberts’s UNIT AUDIO. The now-Madrid-dwelling Roberts has amassed a collection of cassette tapes that he discovered over the years, and the archive serves as the inspiration and the source material for his cassette on Staaltape, the Berlin label run by Rinus van Alebeek and focusing on sound art. Let’s just say that UNIT AUDIO is freaking cornucopia of found sound, pieced together for maximum weirdness and instant likability. It starts strong and stays strong, continuing on its path toward greatness minute by warped-audio minute. Ever thought you’d hear somebody talk about musique concrète that way?” 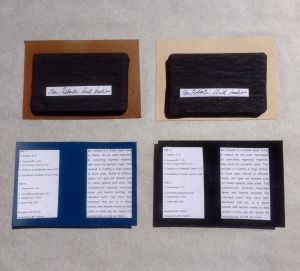 “Hyperbole aside, what Roberts crafts is surprisingly musical, and although tones tend toward the ambient spectrum, there are some rhythmic elements that appear at points. The pieces are stitched together so that the sounds both flow with each other and collide against themselves, sometimes at the same point, depending on the mood Roberts is trying to create. The result is never less than thrilling, as each new passage reveals surprising new directions and interesting new sources, all of which are fairly mysterious, especially if you’re able to turn off your mind as it tries to process each new sample. (Although, Spice Girls? I knew THAT one at least.) (I don’t know what that says about me.) ”

“What does UNIT AUDIO say about Ben Roberts? It affords a peek into his imagination, surely, where the source material swirls until it coalesces into a sensible whole. Roberts invokes the idea of sehnsucht, meaning there’s a “yearning” or a “longing,” a sense that something is missing or imperfect and that something’s presence will restore the whole. UNIT AUDIO is restless, a time capsule, multiple snapshots of human life superimposed on one another in a confusing mass, the disorder, perhaps oxymoronically, satisfying in its turmoil. The whole is here. What’s missing is within us.”

At the moment Unit Audio is only available as a custom made special edition, made on demand.