DeLuxe and Pocket Version of the Cassette Culture Node Linz edition, lmited to ten copies each

In the last days of June 2018 I was a guest at the Cassette Culture Node Linz exhibition, organised by Wolfgang Dorninger. Instead of setting up a workshop and risk zero participants, I made perfect use of the work table in the exhibition space and produced 2×10 copies of the Berlin Tape Run. Berlin Tape Run was the first release by staaltape after a 15 years break. It was also my first production for staaltape.

Both versions are completely handmade and limited to ten numbered copies. I used flyers, magazines, glue, scissors, paint brushes and acryl paint in the process. The tapes were dubbed from a chrome BTR copy on a ferric transparent 40 minutes tape, played back by a Sony pro Walkman and recorded by a Marantz CP430.

DeLuxe and Pocket version are displayed and indicated in the pictures. Both versions have the same content.

group picture of BTR DeLuxe version, down left is the back side.

Tracklist + info, copy from the original artwork of the first BTR edition 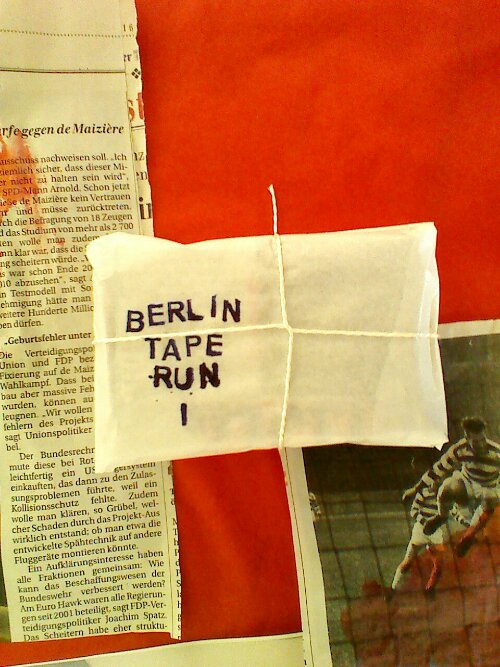 The various stages of the packaging. 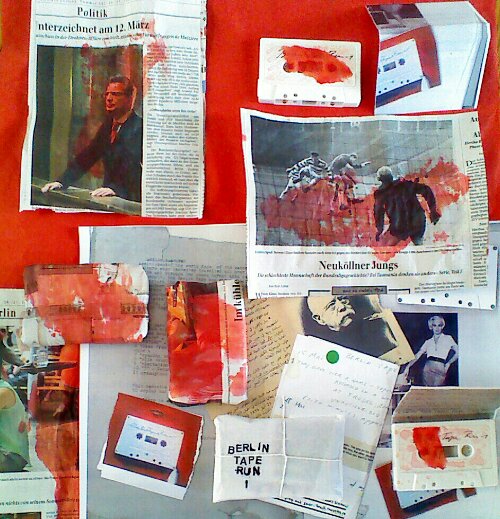 The first edition —
Berlin Tape Run – chrome: 2 x 20 minutes, white cassette, transparent library case, compilation of eleven Berlin based artists. Cover taken from a picture of the T-shirt release of this cassette. Inlay with track list and short info. — is sold out.

Price €6,95 in the shop, to order: mailorder at staalplaat dot com 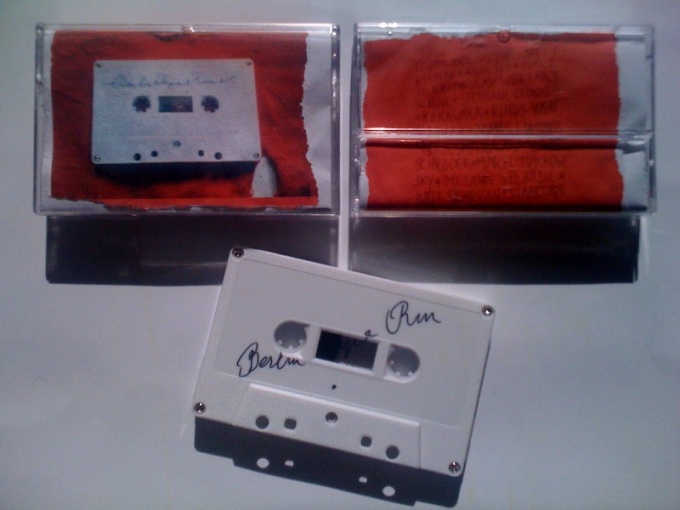 Reminiscent of the early days of the cassette culture when cassettes travelled all over the globe and through the years turned into audio documents, the Berlin Tape Run was initiated to restore this movement, but also to bring it to another level. The cassette was handed over in person from one artist to the other. During four months in 2009 the tape changed hands and places in Berlin. The track order follows this trip; it starts on the 15th of May and ends in September.

1 They gave her a name – Topmodel vs. The Shitty Listener & Guests

1 (Kreuzberg) was recorded with a cassette walkman by Michael Northam at Trodel, Berlin, on April, 12 2009, Unauthorized publication by Rinus van Alebeek.

2 ( Neukolln) The one at the bottom and the one on top repeat for 90 minutes of the tape: “brot”. The other five players repeat (heard from bottom to top respectively): “Salat, Zwiebeln, Tomaten, Fleisch and Kase.” The listener is free to choose what he likes to hear, by playing the tapes accordingly to his taste. Those who prefer a vegetarian version can stop the player with the “Fleisch” – sound.

4 (Neukolln) is obviously a recording of a train. In fact this is me (= Stephane Leonard) riding between 2 coaches in a Romanian rain going from Sibiu to Bucharest in April 2009. I processed the recording to make it sound a bit more like how I felt that day …

5 (Neukolln) The button click from the previous recording was digitally processed and stretched out to 4 minutes for this track.

6 (Neukolln) recorded at Thomas Park in Berlin Neukolln on a Sunday afternoon. This piece is inspired by and maybe a remix of Theme from a Woolley Place by The Tubes.

8 (Friedrichshain) recorded in England before going into the hospital, using viola, guitar, the blue tape recorder and Dictaphone recording of Mrs.Cat: I (= BHS/LSS) don’t want to ever hear this again

9 (Friedrichshain) this audio piece is taken from my (= Marcel Turkowsky) personal Para psychic research archive and was recorded with a Maitra ZRK 246 reel to reel machine in April 1997. I recorded during the night something for my dead star S., researching the electronic voice phenomenon, well and this particular night this showed up surprisingly.

10 (Prenzlauer Berg) got a bit lost on the tape – live recording in my (= Melanie Velarde) bathroom with recordings from the attic opposite my place.

Some Artists decided to make the art work for a personalized copy: 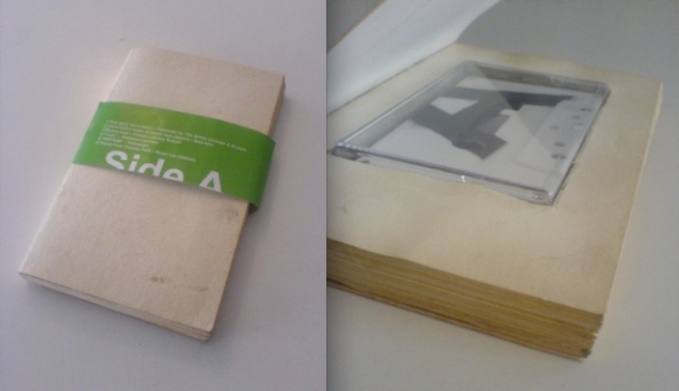 both copies are sold

The design is by Cara Bell Jones. The two copies are sold at the release evening.